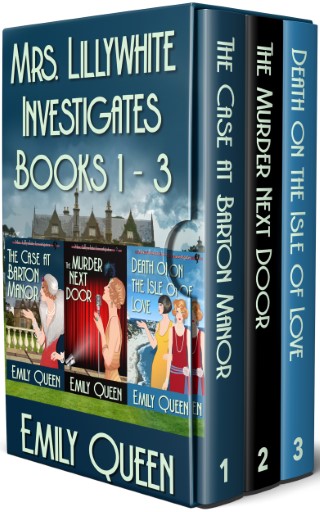 Rosemary Lillywhite only wanted to be left alone to mourn her dead husband in peace, but when a desperate woman knocks on the door of her dead husband’s investigative office, she’s forced to make a choice: come out of hiding or turn Grace Barton away. Working cases with Andrew had been fulfilling, but she couldn’t solve this case by herself—or could she? When Rosemary discovers that Grace is from the same village where her family lives, and that they’re all invited to a party at Barton Manor, she knows it’s a proposition she can’t refuse. With her best friend, bright young thing Vera Blackburn at her side, Rosemary heads to the country and finds herself embroiled in a murder investigation. The plot thickens when she’s forced to defend her brother Frederick’s good name, and is confronted with romantic feelings towards handsome CID detective and old friend Max Whittington. Will Rosemary solve the crime before the murderer strikes again?

Nobody needs a holiday as much as Rosemary Lillywhite. She’s just solved a grisly murder, nearly getting herself killed in the process, and it’s been less than a year since the death of her private investigator husband. Romantic feelings for CID detective Max Whittington—feelings she’s not yet ready to deal with—make the prospect of escaping to the beaches of Cyprus even more appealing. So when, before she’s finished packing her case, another killer strikes—this one even closer to home than the last—Rosemary has to decide which will win out: her desire to get away for some much deserved relaxation, or her visceral need to see justice properly served. Sun and sand will have to wait as this lady detective takes the case of the murder next door.

At long last, lady detective Rosemary Lillywhite and her best friend Vera are on their way to a much-needed holiday in sunny Cyprus—and they’re not traveling alone. Rosemary’s impish brother, Frederick, on sabbatical from work at their father’s company, has decided a little sun and sand is exactly what he needs. With his longtime chum Desmond Cooper—also Rosemary’s childhood crush—in tow, the foursome can’t wait to relax and shrug off the lingering stain of a murder investigation. Unfortunately for Rosemary, death seems to follow her wherever she goes—even as far as the Isle of Love. Will she finally open her heart to a man other than her late husband, and if she does, which one will she choose—Desmond, or handsome CID detective Max Whittington?